← more from
Diagonal Records
Get fresh music recommendations delivered to your inbox every Friday. 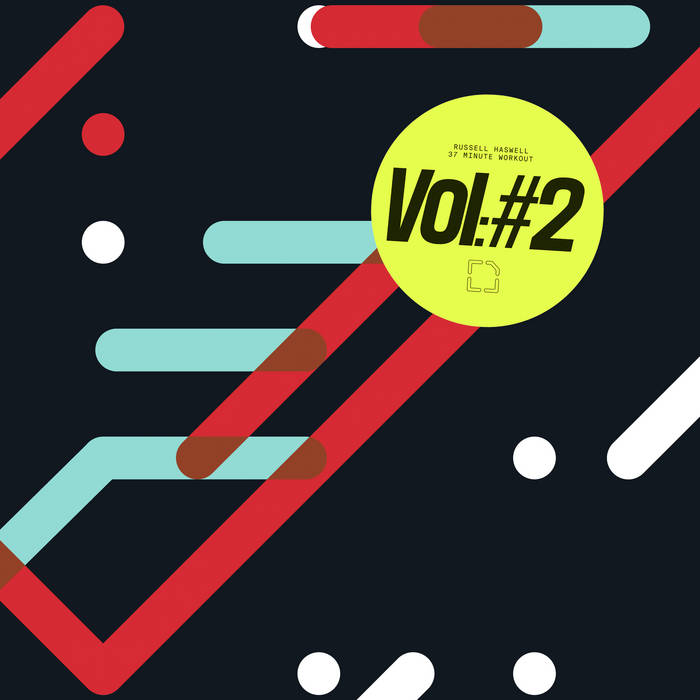 A less frenzied sister act to the original, Russell Haswell’s 37 Minute Workout Vol. 2 explores yet new ground for the artist. Opener ‘The Wild Horses of the Revolution Have Arrived Without a Knight’ bubbles and froths in a wide-open space that’s immediately at odds with the mostly dense and combustible torrents in volume one. The Quietus acutely observed of his 2018 mini-LP, Respondent, that rhythm feels like liberation rather than confinement for Haswell, and here we swim in a seething assemblage of rhythmic objects that ceaselessly curve, warp and reemerge around stretching/contracting moments of silence — and our minds. If Xenakis had written ‘Nomos Alpha’ for drum machine rather than single cello it might have sounded something like this.

Haswell often jokes that the first volume was the first time a record took less time to make than the actual duration of the recording, and this second volume continues the approach: 37 minutes of realtime improvisation that progressively degrade the non-categorisable, outside-time structures he creates. The sense is that the machines have been running since 2014, and Haswell has chosen to hit record again, segmenting a slice, not just of the music, but of the forces at play in his life. The title of ‘Painful Memories From the Past Need to Be Acknowledged’ suggests such an intervention of the present into the past, while the piece itself affirms as a sparkling mosaic of synthetic interpolation.

There is beautiful compositional intelligence at work despite the immediacy of the process, an intelligence ruled and mediated by machines serving other machines, which are, in turn, governed by the artist. Technique here is not simply improvisation/randomisation: it is years of immersion, work, love, vision — all consolidated into an intensely personal process, the physical means that brings these musical objects into existence. The record assumes the feeling of a luminous flow or emission of photons caught in varying degrees of density and disorder.

The artist, on submitting the final recordings, wanted it known that he’d recently visited CERN, The European Organisation for Nuclear Research, in Geneva; he also had dinner with Ted Nelson, whose theories of interwingularity and transclusion seem apt. Embedded within Haswell’s own hyper-text/hyper-audio formations are an array of sonic influences, from Xenakian stochastics to strobing flashbacks of Mills bringing down the legendary Eclipse back in the artist’s hometown of Coventry [‘Cov!’]; but there is also the sense that, embedded here, are the effects of new paths forged outside music — the uprooting of home and studio from London to Glasgow, or simply the malignant political and social forces that swirl around us, dragging us all, kicking and screaming, over the cliff of 2019.

As Plato said in Timaeus, the movement of sounds, even when not conforming to representational standards [something Haswell has always sought to resist], “procure a common pleasure for those who do not know how to reason; and for those who do know, a reasoned joy through the imitation of the divine harmony which they realise in perishable movements.” The structures here stoically assembled — and disassembled — by Haswell leave openings through which the most complex and mysterious factors of the intelligence may penetrate.

Bandcamp Daily  your guide to the world of Bandcamp

Kari Faux drops off her deluxe album 'Lowkey Superstar' plus tunes by Shunaji and Samplelov.